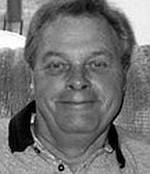 Jerry passed away peacefully on August 26, 2010 at his home in Lynnwood, WA with his family by his side. He was born October 21, 1946, the son of J.B. "Ben" Dahl and Marian I. Dahl in Seattle, WA. Jerry graduated from Edmonds High School in 1964 and served in the Air Force from 1966 to 1969. He owned and operated Western Fleet Supply with his family for 28 years. He belonged to Edmonds Lodge No. 165, Everett Scottish Rite, Nile Shrine and Everett Elks.

He will be missed by his wife and best friend of 38 years, Stephanie Dahl; brother, Randy Dahl; daughter, Kerry Dahl; and daughter and son-in-law, Tracy and Doug Dickinson; but most importantly his number one grandson, Cainen Bennett.

Thank you to all our family and friends for their support and Providence Hospice and Home Care. We are thankful for every minute we had with you.

Published in The Herald (Everett)
http://www.legacy.com/obituaries/heraldnet/obituary.aspx?page=lifestory&pid=144995843