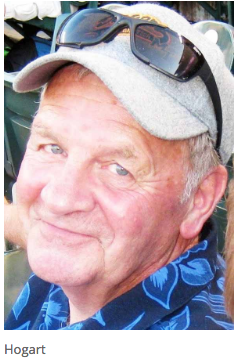 Daniel “Hogie” Thomas Hogart, a hard-working and loving Irishman who would give you the shirt off his back, died on Thursday, May 12, 2016. He was 69 when he died and he died at home in Butte, Montana surrounded by loved ones.

Hogie was born on July 7, 1946, to Helen (Cavanaugh) Hogart and Randall Hogart. He was raised good and tough in the Dublin Gulch of Butte, Montana, where countless memories were made with his brothers, cousin and friends.

Hogie attended St. Mary’s Catholic School and later graduated from Boys Central in 1964. He worked for the Anaconda Company for 20 years and met the love of his life, Mary Susan Briney, who he went on to marry on Oct. 27, 1979, at St. Patrick’s Catholic Church. He often quoted this as being the best day of his life. Dan and Susie raised three strong girls, who were tomboys, loved sports and making their parents proud. Both Dan and Susie coached their daughters throughout their childhood in multiple sports, but Dan’s favorite sporting memoires were watching his daughters play in the State tournaments for softball and basketball. He taught them to “sacrifice the body” to make a play and by god they were Butte tough and proud because of it.

Hogie was a member of the Operating Engineers Local #400 Union and served his country in the Vietnam War from 1968 to 1969. He was honorably discharged.

He eventually went to work for the Butte School District as a maintenance engineer and this is where he retired from in 2007. After retiring, Hogie became a full-time Papa and enjoyed spending time with, or for, his grandchildren. He built numerous projects and crafts in his spotless garage that they will have and cherish forever. There wasn’t much he couldn’t do with the right tool and there wasn’t anything he wouldn’t give for his loved ones.

Hogie was preceded in death by his mother, Helen (Lolly) Hogart; brothers, Jack and William (Bill) Hogart; his mother-in-law, Helen Briney; his brother-in-law, Bob Briney; and his nephew, Nathan Brightbill.

He is survived by his wife, Susie; his three daughters and their husbands, Jackie and Kyle Davis, Jennifer Jo “JJ”and Scott Staudinger, and Jodi and Davin Blixt; his three grandchildren, Teagan Danette Staudinger, Maxwell Mose Davis and Payton Lily Staudinger; his brother, Tim Hogart and sister-in-law, Nancy Hogart; his sister-in-law, Mary Carol Hogart; his sister, Margie Burink; and his brothers-in-laws and sisters-in-law, Gary and Carol Briney, Jim and Chuckie Briney, and Larry and Karen Briney. He is also survived by his many cousins, nieces, nephews, great-nieces and great-nephews. He is also survived by his partner-in-crime, Rudy.

Visitation with the family will begin at 10 a.m. Wednesday, May 18, at St. Ann’s Catholic Church, with the funeral following at 11. Rite of committal will be in Holy Cross Cemetery. Memorials are preferred to the Butte Central Education Foundation or the Butte Sheltered Workshop.

Hogie will miss watching the Notre Dame Fighting Irish this coming college football season, but don’t doubt an extra angel will be cheering them on from above. Go Irish!