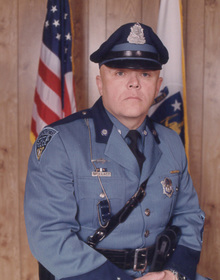 John “ Jack “ M. Spellacy, 71, passed away Mon. surrounded by his loving family. He was born Jan. 24, 1943 to the late Daniel and Helen ( Maloney ) Spellacy. Jack was a graduate of Cathedral High School. He served on the Massachusetts State Police for many years before retiring Dec. 31, 2002. As a state trooper, Jack served on the St. Police S.T.O.P. Team, and was the Tactical Operations Supervisor for the WMass Task Force. He was also a Drill Instructor for the St. Police and the Agawam Police Academy. Jack also served in the Lee and Russell Barracks. He marched in several St. Patrick’s Day Parades in Ireland. An avid reader, he enjoyed working out and riding his motorcycle. But most of all, he enjoyed spending time with his family, especially seeing his grandsons playing sports. Jack is survived by his former wife Judy ( Harder ) Spellacy, his daughter, retired inspector with US Marshall Service Kathryn Spellacy of York, ME., his son John M. Spellacy Jr., and his fiancé Aimee Wells of Spfld, his 2 grandsons Peyton and Cole, his brother, former Deputy Chief of Police of Spfld Daniel Spellacy and his wife Janice of Agawam, his 3 nephews; Daniel, Brian and Christopher Spellacy and many friends and former troopers. Family and Friends are invited to a 10 AM Liturgy of Christian Burial THURSDAY in Sacred Heart Church, 395 Chestnut St., Spfld. Burial will be private and at the convenience of the family. Calling Hours will be held WEDNESDAY from 3 to 7 PM in the SAMPSON’S FUNERAL HOME, 710 Liberty St. Spfld, MA. In lieu of flowers, memorial donations may be made to the Shriners’ Hospital for Children, 516 Carew St., Spfld, MA 01104 or to the St. Jude Children’s Research Hospital, 501 St. Jude Pl, Memphis, TN 38105-1942