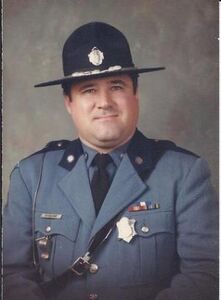 John was born in Methuen on February 5, 1947, to the late Frank H. and Elizabeth (Deyermond) Dushame.

He was a graduate of North Andover High School and received his degree in criminal justice from Northern Essex Community College.

John served in the U.S. Army Military Police in Korea during the Viet Nam War and was very proud of his military service. He was a member of the Cochicewick Masonic Lodge in North Andover and the North Andover VFW Post 2104. John was a devote parishioner of St. Michael's Church.

He was a retired Massachusetts State Police Trooper, having served for twenty-five years. He was a graduate of the State Police Academy 55th Class Recruit Training Troop.

John was a devoted family man. He enjoyed time spent with his grandchildren and dressing as Santa Claus for them during the holidays. He also enjoyed reading, canoeing and camping and was an avid John Wayne movie and memorabilia fan.

He is survived by his son, John S. Dushame and his wife, Tracey, of Methuen. He is also survived by his sisters, Beth Davis and her husband, Michael, of North Andover and Sally Mortenson and her husband, Jay, also of North Andover; and his brother, Peter and his wife, Judi, of New Hampshire. Also among his survivors are his former wife, Carlotta (Catalano) Dushame; grandchildren, Jake, Matthew and Chelsea Dushame; as well as his longtime companion, Carol Dailey of Deposit, N.Y.; brother-in-law, Charles Murnane of Port St. Lucy, Fla.; and several nieces, nephews, great-nieces and great-nephews. John was predeceased by his sister, Martha Murnane; his brother, Frank Dushame and his sister-in-law, Mavis Dushame.

ARRANGEMENTS: A funeral Mass will be offered on Saturday at 10 a.m. at St. Michael's Church. Burial will follow in Ridgewood Cemetery, North Andover.

Family and friends may call on Saturday morning prior to the Mass from 8 to 9:30 a.m. at the Conte Funeral Home, 28 Florence St., Andover.

For directions or to offer online condolences, please visit www.contefuneralhomes.com.