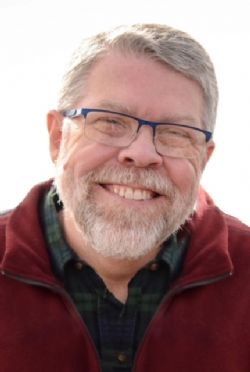 Leslie “Keith” Laughery was a beloved husband, father, granddad, brother, spiritual mentor, and friend. After a sudden and brief fight with kidney cancer, he ran into the arms of Jesus and passed peacefully from this world on April 1, 2021, surrounded by his wife and children who will honor his legacy by committing their lives to doing as he did – loving and serving others.

Keith was born to Gerald and Ruth Laughery on February 11, 1961. He graduated from Lubbock Christian College with a Bachelor’s degree in Business Administration in 1983. During his career at LCC, he passionately invested his time in the men’s social club Koinonia and in two choral groups – Kingsmen Quartet and Meister Singers. One evening on the Meister Singers bus, he was fatefully paired with a curly-headed brunette named Jane Wilson, the two of them tasked by their director with discussing a particular topic. The conversation naturally and delightfully flowed that night and for countless nights thereafter, and the two were joyfully wed on April 23, 1983. The pair were married until his passing, celebrating nearly 37 happy years together.

Driven always by his background in business, affinity for financial advising, and deep-rooted need to serve those around him, Keith found immense success in his professional career, holding a number of fulfilling positions throughout his life, including as a self-employed financial planner, a Clinical Applications Analyst at Covenant Hospital, and as an IT Auditor at CoNetrix. His most recent role was as an Account Manager, also at CoNetrix, where he was known to all as a fastidious and loyal employee; a personable and caring professional; and a relational and supportive coworker and friend. To Keith, work was not an obligation but a blessing, and he touched countless lives through his commitment to using every position he held to honor God and to further His Kingdom.

Keith was incredibly family-centered, spending as much time as he could with his wife, his children, and his two grandchildren. He was also a mentor and leader by nature – he gave back to LCC, now LCU, by serving for over 10 years as an advisor for the young men of Koinonia, by whom he has been affectionately named the “dad of Koinonia,” and by serving as a member and as the president of Friends of the Arts. He had a lifelong passion for music and used his musical gifts in a variety of ways, including serving on the worship team at his home church, Church without Religion, and at the annual “Walk to Emmaus.” Above all else, Keith built his personal life on the foundation of his Christian faith, a faith that resulted in a lifetime’s worth of enriching relationships and friendships.

He was preceded in death by his father, Gerald, and his grandmother, Beryl.

In lieu of flowers, the family requests donations be made online to Lubbock Christian University’s Friends of the Arts.