Class photo from the 50th with names

Photos from the 50th

pdf of the booklet from the 50th

Pictures from the past movie

When I Was A Young Buck

When I Was A Young Buck 2

As of this time, please visit http://okemos1969.weebly.com/ 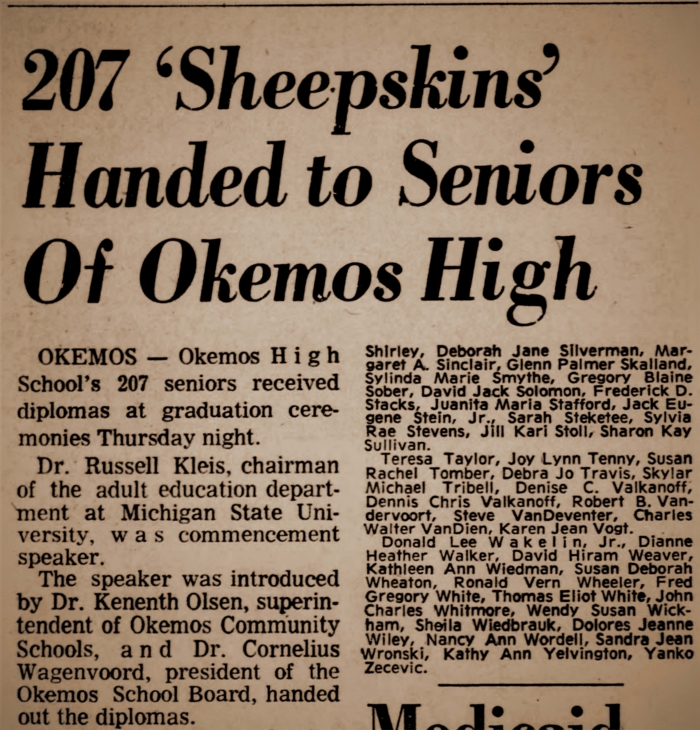 Putnam: Crocodiles, lizards and, most of all, passwords salvage Grand Ledge couple's trip

A robbery during their Central America vacation didn’t steal a Grand Ledge couple's joy thanks to fast thinking.

Tom and Sibyl White, who just moved to Grand Ledge from DeWitt, were deep into an off-the-beaten-path vacation in a small Coasta Rica fishing village called Tarcoles when the trip could have come to a screeching halt.

The Whites and their friends, Tom and Patty Biazzo of Port Townsend, Washington rented a house together. The two Toms roomed together at Michigan State University in the early '70s and address each other by their last names.

“We wanted to do an adventure vacation,” Tom White said.

It was adventurous. They saw crocodiles, exotic birds, bats, a sloth, lizards and monkeys. They trekked to an active volcano and took a hike that required passage over hanging bridges that swayed 500 feet above the ground.

The couples were wrapping up their two-week trip in February, when they were robbed while they were sleeping at their rented house.

Video surveillance showed the intruder showing up at 1:30 a.m. on Valentine’s Day. He tried several windows before he successfully removed a window from its casing by taking out screws.

Though he spent 45 minutes getting into the house, White said the intruder only stayed for a few minutes. He moved boldly through the house, however, even turning on a light in one room near the sleeping couples. He took the Biazzos' two iPhones, $70 in cash, some clothes, a pocket knife and White’s bathing suit, which he wore on his head to hide his identity. Left behind were jewelry and credit cards.

I had my own heart-stopping vacation moment last year, when my friend’s wallet went missing in Prague. We worried that it would ruin our trip. With the help of police who returned her wallet — minus the cash — we squared things away and carried on for a few more days of fun.

But this situation was far worse than a pickpocket. An intruder was in their house while they were sleeping. It was dangerous.

Tom White of Grand Ledge captured a photo of a sloth while in Costa Rica in February 2018. (Photo: Courtesy)

White was awakened by his former roommate in the early hours:  “White, wake up, we’ve been robbed.”

His friend recalled that he woke up at 1:45 a.m. and looked at the clock. The intruder was already at work breaking into the house, the video footage later showed.

It dawned on them they could have been confronted by the man.

“We were so happy that nobody got hurt,” White said.

To deal with the stolen phones, White tried to find information online and called an Apple help line but was unable to get the aid they needed.

That's when his wife called their daughter, Amanda Wonnacott, back in Grand Ledge. She had just dealt with a similar situation.

Amanda told them to have the Biazzos log onto another Apple device and use the app, Find My iPhone. Android phones have a similar app.

The key was remembering their Apple passwords. Patty Biazzo had them.

The couple was able to log in on Tom White's iPhone and freeze the information that might be pulled from their phones, such as passwords and credit card numbers. Back home, Wonnacott called the couple’s phone service and turned it off.

They got back to their vacation.

The key to a great trip? White says to keep a good attitude, roll with the punches, and remember your passwords.