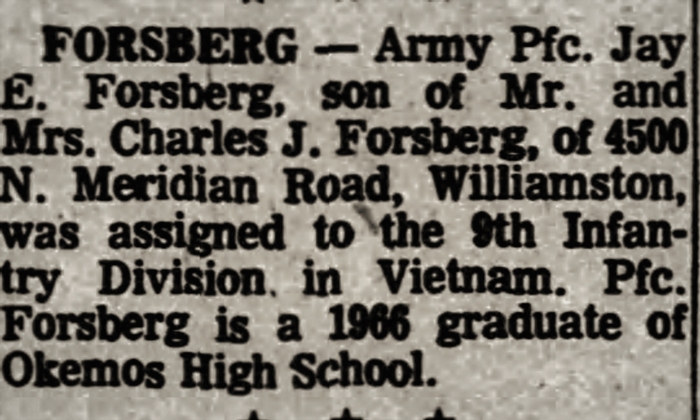 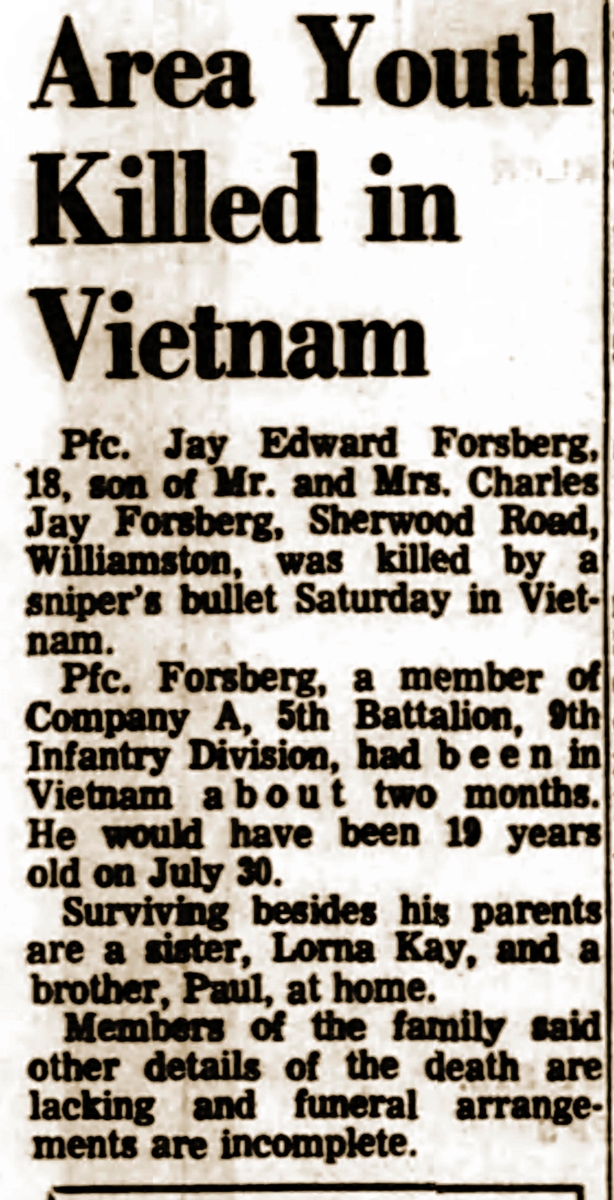 Pfc. Forsberg, a member of Company A, 5th Battalion, 9th Infantry Division, had been in Vietnam about two months.  He would have been 19 years old on July 30.

Surviving besides his parents are a sister, Lorna Kay, and a brother, Paul, at home.

Members of the family said other details of the death are lacking and funeral arrangements are incomplete.

Pfc. Forsberg was graduated from Okemos High School in June 1966 and enlisted in the Army in November 1966.  He had been in Vietnam about two months.

In addition to his parents, he is survived by a sister, Lorna Kay, and a brother, Paul, both at home, and two grandparents, Mr. and Mrs. Lester Barnes of Manton.

Age 18, died July 2, 1967, in Vietnam.  He was born July 30, 1948, in Lansing.  He was a lifelong resident of Okemos, graduated from Okemos High School in June, 1966, and enlisted in the Army Nov. 1, 1966.  He is survived by his parents, Mr. and Mrs. Charles Forsberg of Williamston, 1 brother, Paul Roy of Williamston, 1 sister, Lorna Kay of Williamston.  Grandparents, Mr. and Mrs. Lester Barnes of Manton, Mich.  Funeral services will be held Monday at 3:30 p.m. from the Gorsline-Runciman East Chapel with Rev. Charles Goudey of Pilgrim Congregational Church officiating.  Graveside services by the U. S. Army.  Interment in Glendale Cemetery.

Jay and I went from K-12 together.  Always got along with him.  He was a nice friend.  I didn't run or socialize with him but we did study together at school (he didn't like to study!) and we talked.  He was a typical teenager of the era with no goals, unsure of what to do next and lacking a lot of motivation.  Hindsight of course is always so accurate :-)   Wonder what he'd be doing now --- probably in the construction/building trade as was others in his family.  How quickly the years have slipped past.  Jay's been gone 50 years!!!!!