Reprinted from the Pauline Lang scrapbook 1940 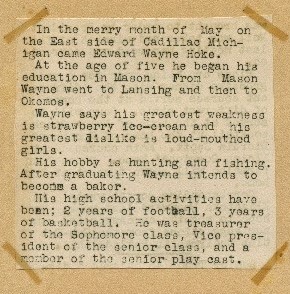 Wayne enlisted in the US Army Air Corp 4 March 1941 in Detroit, Wayne County, Michigan.  He was described as 66" tall and weighing 133 pounds.

Joining the ranks of the A. A. F. sharpshooters who've been winging the Axis warbirds right and left, is Gunner Sgt. Edward W. Hoke, son of Mr. and Mrs. Ernest J. Hoke, R. 2, Lansing, who graduated recently from the Harlingen army gunnery, Texas the alma mater of several other local boys during recent months.  Gunner Hoke will operate those 50-caliber m. g.'s as an integral part of a bomber crew.  {Note: Wayne was a ball turret gunner. Click this link to read about "A Ball Turret Gunner in WWII". }

Sgt. Edward H. (newspaper typo) Hoke, 23, son of Mr. and Mrs. Ernest J. Hoke, 708 Jessop street, has been killed in action in the European war theater, according to a telegram received from the war department by the parents, it was revealed here Wednesday.  The message expressed formal regrets and stated a letter with details would follow.  The young man, an aerial gunner was killed April 22, less than two months after leaving this country on March 1 this year.

Sergeant Hoke was born in Cadillac May 16, 1920 and came here with his parents.  He graduated from Okemos high school in 1940 and enlisted in the army air corps in March, 1941.  After preliminary training at Scott Field, Ill., and Keesler Field, Miss., he graduated from the gunnery school at Harlingen, Tex.

After advanced training in Florida and other assignments in various parts of the country his last station here was at Harington, Kan., where his parents saw him for the last time two days before his departure.

Sergeant Hoke was employed for a time at one of the local Market Basket stores before entering the service.  His father is foreman of receiving and transportation at Reo Motors, Inc.

Besides the parents he is survived by three brothers, Kenneth, Harold and Ernest, jr., all of Lansing, and four sisters, Mrs. Roland Kalmbach, Elsie Hoke and Norma Jean Hoke, all of Lansing and Margaret Hoke of San Marcus, Tex.  An uncle, Wayne Hoke, and an aunt, Mrs. Christina Flortias, also live here.

Young Hoke, the son of Mr. and Mrs. E. J. Hoke, was a 1940 graduate of the Okemos high school. He was born in Cadillac May 16, 1920.  The family lived here on Mr. Hope road for a number of years, only leaving this country early in March.  Hoke had been in action only a short time.

Sergeant Hoke is the first casualty from this vicinity, although there have been several service men wounded in action.

Detailed information regarding how Sgt. Edward Wayne Hoke, 23, son of Mr. and Mrs. Ernest J. Hoke, 708 Jessop street, was killed in action in the European war theater, was received here Monday by his parents in a letter from Arthur L. Duhl, chaplain of the 467th bombardment group.

The letter, expressing the deepest sympathy of all the men and officers with whom the Lansing air corps sergeant served, followed a telegram of May 10 which reported the young man killed in action April 22, two months after he left this country.

The chaplain wrote that Sergeant Hoke was killed after his bomber had been intercepted and attacked by enemy fighters while returning from a sortie against the enemy. "His death was apparently instantaneous," the letter stated. "His body was recovered and given full military honors in a service in which I and other chaplains participated.

"Your son was very highly thought of among his fellows and will be missed very greatly.  He died gallantly in the active defense of all that we hold dear, so that your sorrow may be mingled with the pride in his sacrifice and his achievements.  Let us pray to the God of freedom and justice that his sacrifice may not have been in vain," Chaplain Duhl added.

He was Vice President of his 1940 Senior Class.

HOKE - Mr. and Mrs. Ernest J. Hoke and family wish to thank their friends and relatives also Rev. Paul Vincent for the kindness and sympathy shown them during their recent bereavement.

The Lansing State Journal, 30 May 1945, printed a several page spread list of all killed in action (KIA) and missing in action (MIA) servicemen from the Lansing area.  Edward Hoke was listed. "Sgt. Edward H. (newspaper typo) Hoke, son of Mr. and Mrs. Ernest Hoke, 706 Jessop street, killed in action.  He graduated from Okemos high school and formerly worked at a Market Basket store.

Heavy are our hearts today,

Memory brings you back once more,

to the time when you were with us

To the happy days of yore.

EDITORS NOTE:  In July 2018 I was contacted by a gentlemen who related that his recently deceased elderly aunt had fallen in love with Wayne Hoke.  The couple were engaged to be married prior to Wayne's shipping out to the World War II European Theatre.  It was while the estate of same lady was being settled that her scrapbook was found in the bottom drawer of a dresser.  Pictures of Wayne, his fiancee, and Wayne's family were pasted in the book.  A sister to the deceased lady said the handsome man was Airman Wayne Hoke and told the story of couple's plans to be married when Wayne returned home from war.  For 7 decades and to death, the lady kept her precious memories filled scrapbook of a lost love.