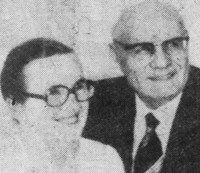 Okemos, Feb. 12 - Several parties have been held to honor Miss Doris Powell, whose marriage to John Aseltine of South Bend, Ind., and a graduate of the Okemos school, will take place Wednesday afternoon at the Baptist Church in Okemos.

Both young people are well known in this community, having always lived here.  Miss Powell is the daughter of Mr. and Mrs. Arnold Powell and the young man the son of Mr. and Mrs. F. Aseltine of Meridian.  After their marriage they will live in South Bend where Mr. Aseltine is pastor of a United Brethren church.  This church, which is newly organized, is his first pastorate.

Behind the Rev. John Aseltine and his wife Doris are the terrors of an Algerian rebellion. 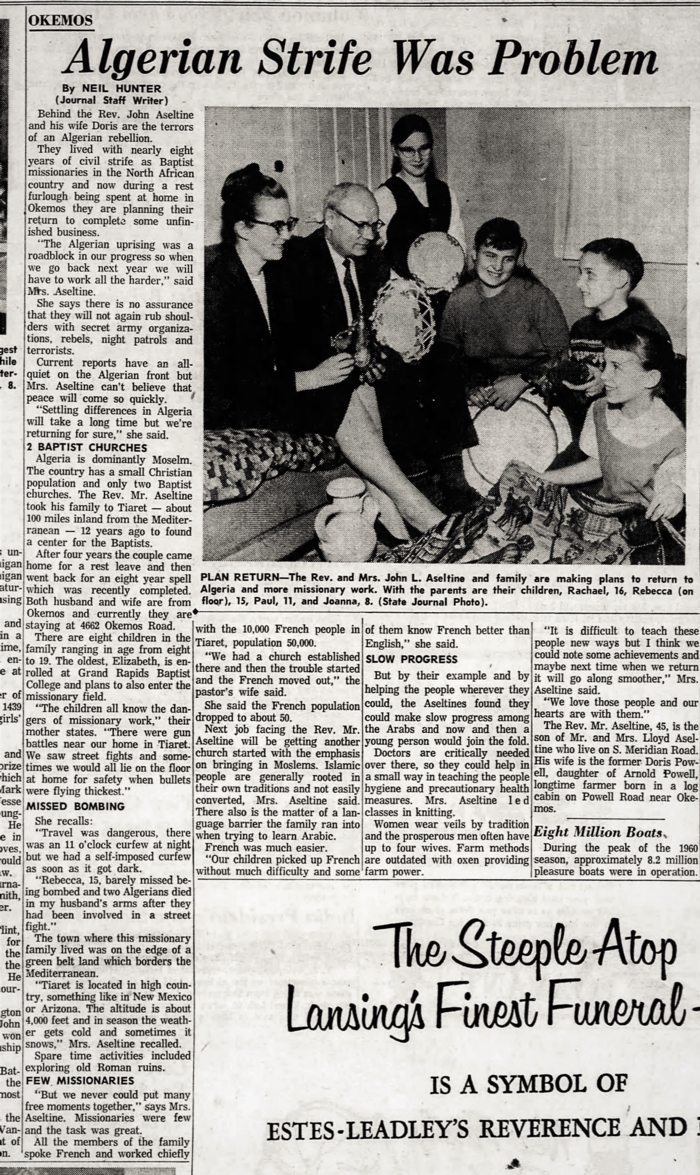 They lived with nearly eight years of civil strife as Baptist missionaries in the North African country and now during a rest furlough being spent at home in Okemos they are planning their return to complete some unfinished business.

"The Algerian uprising was a roadblock in our progress so when we go back next year we will have to work all the  harder." said Mrs. Aseltine.

She says there is no assurance that they will not again rub shoulders with secret army organizations, rebels, night patrols and terrorists.

Current reports have an all-quiet on the Algerian front but Mrs. Aseltine can't believe that peace will come so quickly.

"Settling differences in Algeria will take a long time but we're returning for sure." she said.

Algeria is dominantly Muslim.  The county has a small Christian population and only two Baptist churches.  The Rev. Mr. Aseltine took his family to Tiaret - about 100 miles inland from the Mediterranean - 12 years ago to found a center for the Baptists.

After four years the couple came home for a rest leave and then went back for an eight year spell which was recently completed.  Both husband and wife are from Okemos and currently they are staying at 4662 Okemos Road.

There are eight children in the family ranging in age from eight to 19.  The oldest, Elizabeth, is enrolled at Grand Rapids Baptist College and plans to also enter the missionary field.

"The children all know the dangers of missionary work," their mother states.  "There were gun battles near our home in Tiaret. We saw street fight and sometimes we would all lie on the floor at home for safety when bullets were flying thickest."

"Travel was dangerous, there was an 11 o'clock curfew at night but we had a self-imposed curfew as soon as it got dark.

"Rebecca, 15, barely missed being bombed and two Algerians died in my husband's arms after they had been involved in a street fight."

The town where this missionary family lived was on the edge of a green belt land which borders the Mediterranean.

"Tiaret is located in high country, something like in New Mexico or Arizona.  The altitude is about 4,00 feet and in season the weather gets cold and sometimes it snows." Mrs. Aseltine recalled.

"But we never could put many free moments together," says Mrs. Aseltine.  Missionaries were few and the task was great.

All the members of the family spoke French and worked chiefly with the 10,000 French people in Tiaret, population 50,000.

"We had a church established there and then the trouble started the the French moved out," the pastor's wife said.

She said the French population dropped to about 50.

Next job facing the Rev. Mr. Aseltine will be getting another church started with the emphasis on bringing in Muslims.  Islamic people are generally rooted in their own traditions and not easy converted, Mrs. Aseltine said.  There also is the matter of a language barrier the family ran into when trying to learn Arabic.

French was much easier.

"Our children picked up French without much difficulty and some of them know French better than English," she said.

But by their example and by helping the people where ever they could, the Aseltines found they could make slow progress among the Arabs and now and then a young person would join the fold.

Doctors are critically needed over there, so they could help in a small way in teaching the people hygiene and precautionary health measures.  Mrs. Aseltine led classes in knitting.

Women wear veils by tradition and the prosperous men often have up to four wives.  Farm methods are outdated with oxen providing farm power.

"It is difficult to tech these people new ways but I think we could note some achievements and maybe next time when we return it will go along smoother, Mrs. Aseltine said.

"We love these people and our hearts are with them."

The Rev. Mr. Aseltine, 45, is the son of Mr. and Mrs. Lloyd Aseltine who live on S. Meridian Road.  His wife is the former Doris Powell, daughter of Arnold Powell., longtime farmer born in a log cabin on Powell Road near Okemos.

John, Doris and Family were expelled from Algeria in 1970.  They moved to Toulon, France and began a new mission work there.  John died  and was buried in France in 1999.  Doris died 25 November 2007 probably in Grand Rapids, Michigan and was interred Leek Cemetery, Okemos.  John has a headstone in Leek Cemetery.