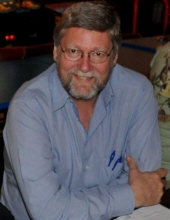 Thomas Clayton Clark Jr., died on Sept. 5, 2016 at his home after a courageous battle with ALS.
Thom, the only child of Dorothy and Thomas Çlayton Clark, Sr., was born and raised in Waco, Texas. Thom graduated from Waco High School as Valedictorian. He then attended Oral Roberts University where he met Mary Jane Meinhardt. They married May 17, 1974 and recently celebrated 42 years together. They have two sons, Clayton, Carson and 5 grandchildren.

After college, Thom and Mary made their home in Broken Arrow, OK., where their sons were born. They later moved to Cokato MN to be near Mary's large family, ultimately returning to Tulsa in 2007.

Thom graduated from ORU with a BA in Communications. Later in life he completed a second degree in Applied Measurement Science. Professionally, Thom's career was varied. Initially, he started in sales and later moved into retail. He was a Calibration Specialist and most recently he was self-employed as a comptroller for a variety of Tulsa's businesses.

Thom was a long time member of Christian Chapel and served in various roles at all the churches he attended. He often helped those in need volunteering with Big Brothers/Big Sisters, Co-Director of Awana, mentored young men, served on ministry boards, volunteered at Royal Family Kids, a summer camp for foster children and he helped many troubled youth. Thom and Mary opened their home to many in need. Thom's strong faith and love for Jesus was seen in his servants heart; a kind, gentle, and compassionate man.

Thom is survived by his wife, Mary Clark, son Clayton Thomas Clark (6'1") and his wife Vanessa with their 5 children - Havana, Aubrey, Angelina, Laya and Scarlett. Son, Carson Todd Clark (6'4") his wife Alicia. His greatest joy was spending time with his sons and grandchildren. Thom will be greatly missed by his family and wonderful dear friends.
Family wishes for memorials to be sent to: Thom Clark Family 3701 W. Canton St., Broken Arrow OK 74012.

In lieu of flowers, the family requests contributions be made to Royal Family Kids Camp, a free week of summer camp for children in foster care. Contributions can be sent to Christian Chapel.