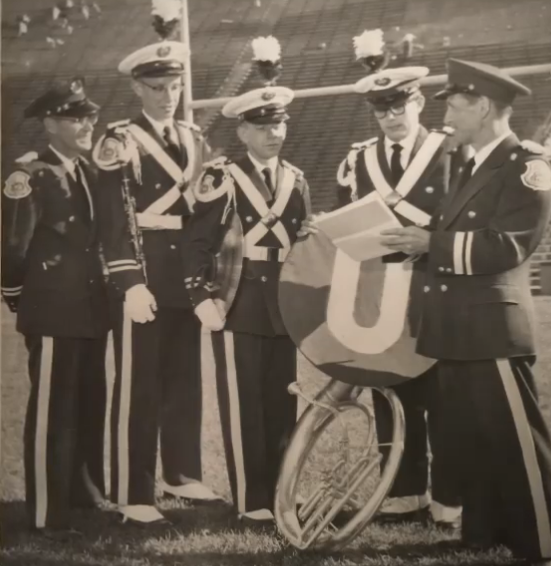 Brother Leon Bradley (initiated in 1957) passed away in 2017.  Leon played trombone and was a long time faculty member/band director at the School of the Ozarks in Missouri.  He's pictured above, second from the right, standing next to MSU Band Director/Brother Leonard Falcone.

Karl Bradley is trombonist with the U S Air Force Academy Band in Colorado Springs.

Joe Spaniola is Professor of Music at the University of West Florida where he is Director of Music Theory and Jazz Studies.  For nine years he was Chief Composer/Arranger for the U S Air Force Academy Band.

A good time was had by all at Sinfonian Saturday held on April 27, 2019.  Beginning with an American Music Recital, we then segued to the awarding of pins to brothers who had been initiated 10, 25 or 50 years ago.   This was followed by the initiation of new brothers to Gamma Epsilon chapter and then concluded with a pizza party.  All events were held in the Music Building which made it super convenient to move from one venue to another.  Hats off to the Brothers of Gamma Epsilon for organizing and hosting this great event. 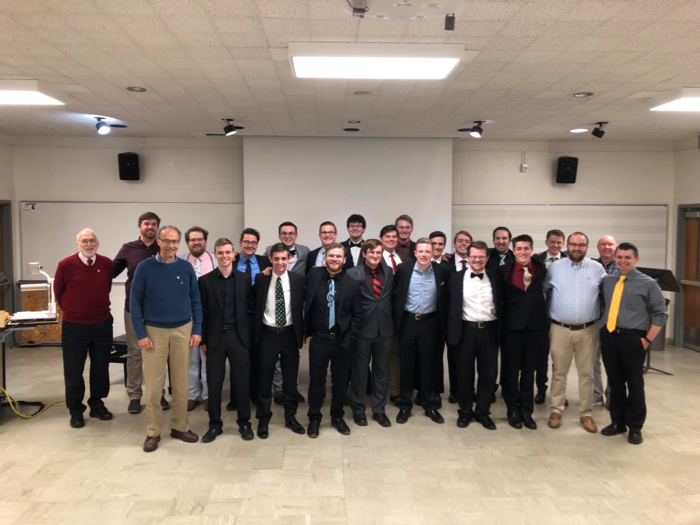 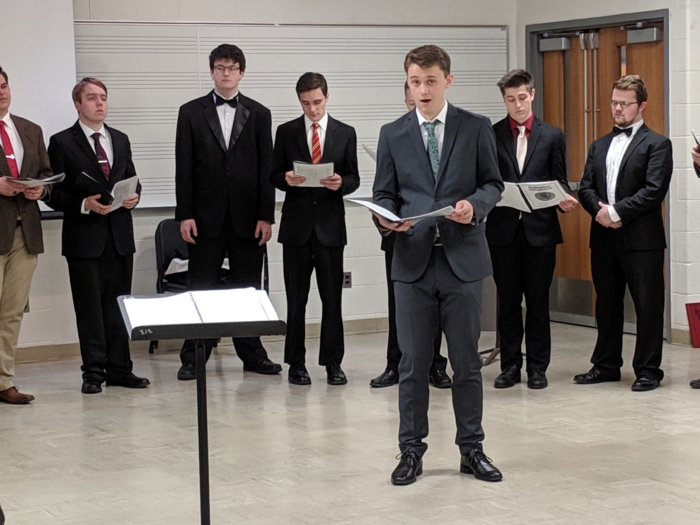 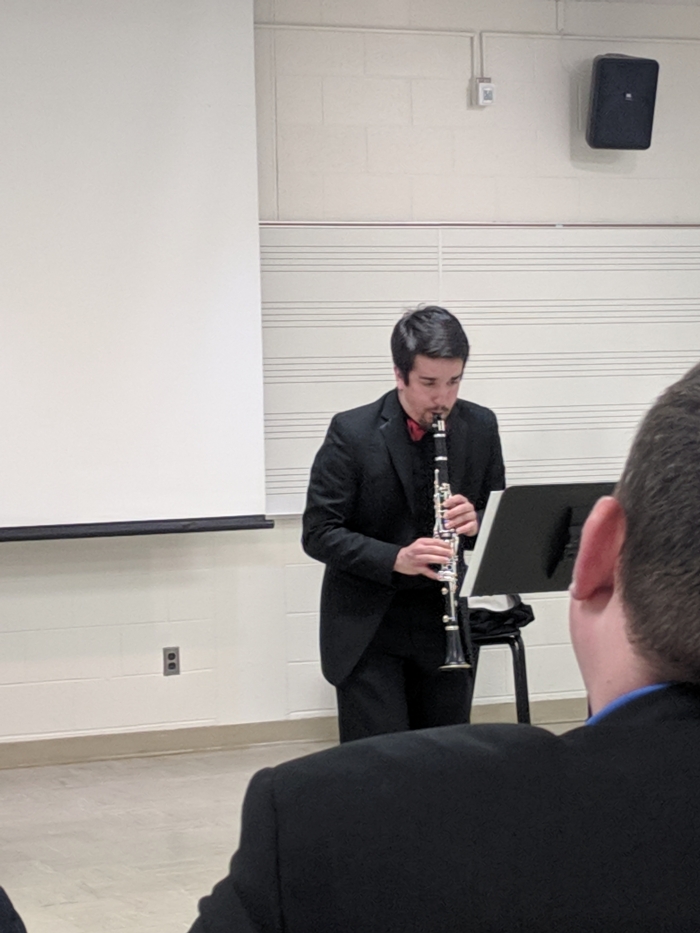 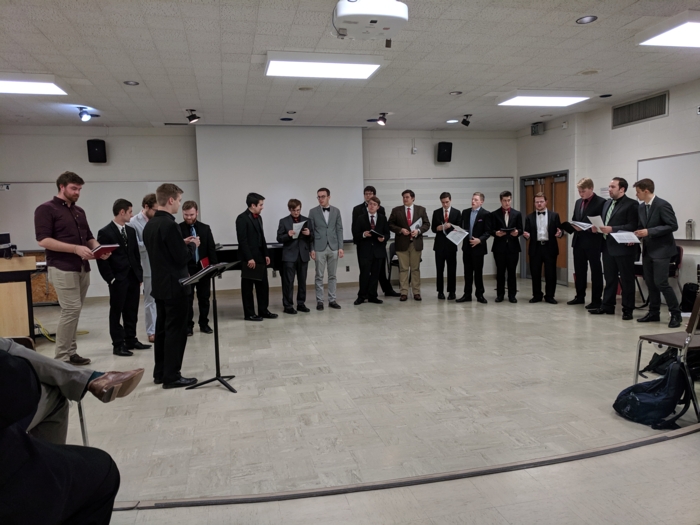 This is the second time Gamma Epsilon has invited alumni Brothers to join them in the Sinfonian Saturday.  If all goes according to plan, the next one will be held in three years.  Mark it on your calendars now - you don't want to miss it!

Thanks to Brothers Dominic Occhietti and Anthony Machniak for the photos.

Anyone need a sacbut, a hurdy gurdy and an assortment of schawms?

Until recently Gerhart (Gary) Schmeltekopf (Gamma Epsilon 1960) would have been the “go to” person for any of these instruments. He owned them all.   It seems that through the years Gary managed to amass a fairly sizeable group of functional reproductions of medieval and renaissance instruments.  And, not wanting to hang them on the wall and spend his spare time dusting them, he regularly played them at concerts, weddings, school assemblies and birthday parties in the Chicago area with his Gerhart Ensemble.  Sometimes joined by his wife Angela and his brother Duane (Gamma Epsilon 1962), Gary brought music history to life through these wonderful instruments. 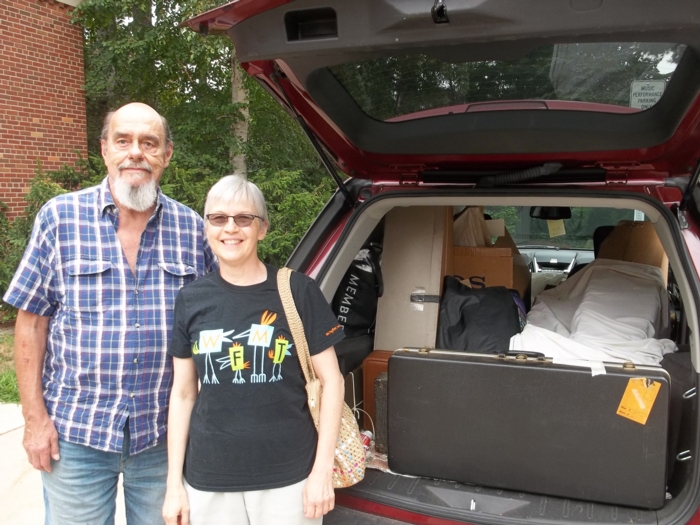 On July 31, 2018 Gary and wife Angela loaded up the family van and drove to East Lansing with over 30 of these instruments which he donated to the MSU College of Music.  At MSU they were greeted by musicologist Dr. Sarah Long, Dean Jim Forger and, of course, retired College of Music faculty member/cousin Roger Smeltekop (Gamma Epsilon 1965).   Dr. Long hopes to be able to use these instruments in her teaching to allow students the opportunity to step back in time and actually perform with the instruments.

Much discussion and excitement ensued as each instrument was unpacked and described.

Most remember Gary as a music major and trombonist in the MSU bands in the late 50s/early 60s.  Gary eventually strayed from the trombone and in the mid 70s he started a business in Oak Park, Illinois called “The Early Music Center.”  He sold reproductions of early music and period instruments – mostly Baroque style recorders.  The store was in addition to his existing business of repairing, tuning and renting harpsichords.  He also enjoyed building and “rescuing” harpsichords and clavichords that had an uncertain future.

The “Oak Leaves”, a suburban newspaper from Oak Park, described Gary’s passion in this way:

"Schmeltekopf acquaints his audience with wooden recorders of several eras, showing the changes in sound that developed. Trumpet enthusiasts hear the cornetto, whose only resemblance to the modern cornet is the mouthpiece.  The body is of wood with fingerholes for pitch differences instead of valves. Sacbuts resemble their offspring, trombones.  A special treat is the gemshorn, made from an ox horn, blown at the large end. The instrument produces a lovely flute-like tone."

In the 1980s “The Early Music Center” was featured on Chicago’s Channel 5 with Gary and a few friends performing on his early instruments and discussing the various differences.  This was followed a few months later with the taping of a Christmas show in front of the beautiful English gothic altar of a Chicago Episcopal church.

“The Early Music Center” flourished until around 1990 when the demand for reproductions of old instruments waned.  His stock of unsold instruments was donated to the People’s Music School in Chicago (https://peoplesmusicschool.org/).  The School is committed to providing high quality, tuition free, music education for Chicago-area students who would otherwise not be able to afford such education.

Gary, however, continued to maintain a collection of the most unusual of these instruments.  And it is this collection that has been donated to the MSU College of Music so these instruments will continue to make beautiful music for many years to come.

In addition to being obsessed with ancient musical instruments, Gary has been a mainstay in the Chicago musical scene.  His tromboning has been heard with numerous Broadway shows, he’s been a member of various brass ensembles, and he has performed with the Lyric Opera, Grant Park Symphony and the Chicago Symphony.  You can contact Gary via the Spartan Sinfonian Alumni website.  Go to “Brother Profiles”, click on “1960” and then his name.  Then click on “Send Gary a private message”.

Test your knowledge of these ancient instruments (answers at bottom of page): 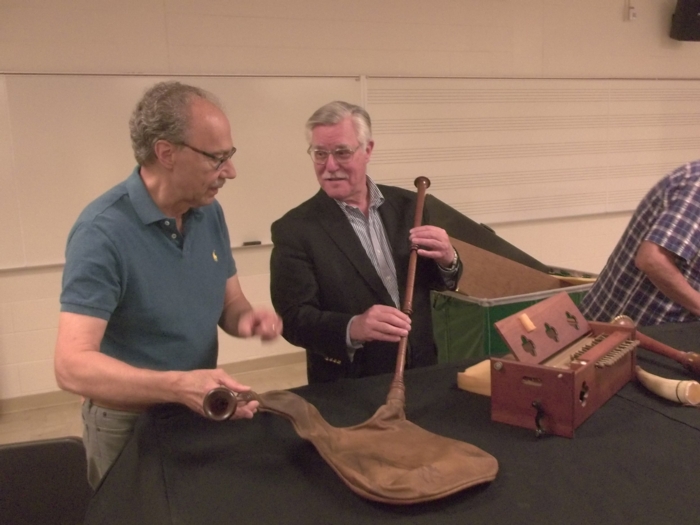 1. Roger Smeltekop and Dean Forger are discussing the possibility of a new method book to teach how to play the: 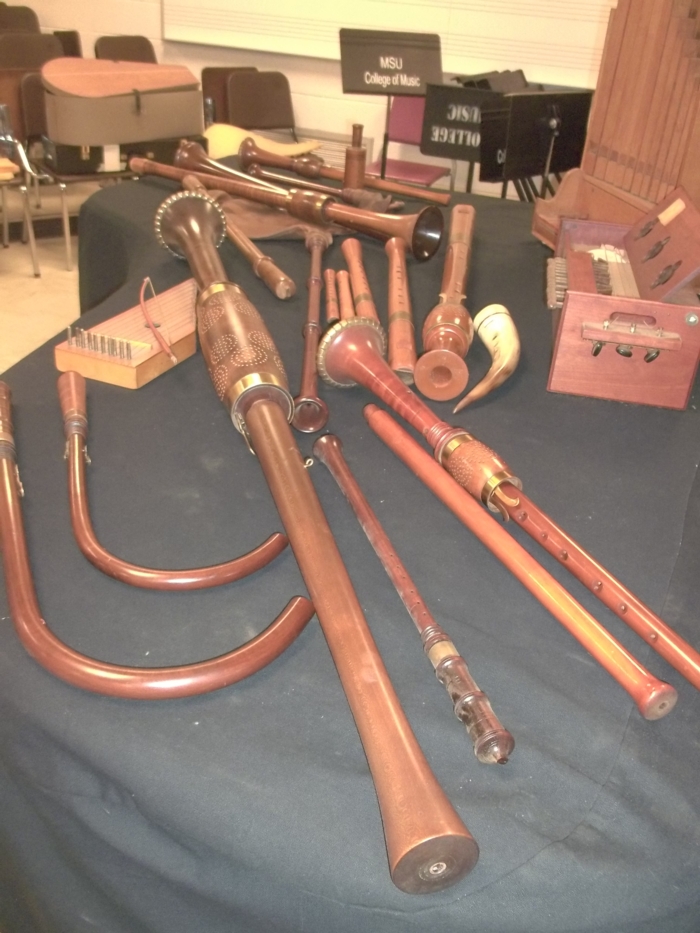 2. Included were a number of different recorders.  However the curve of two of the instruments (see picture) sets them apart as: 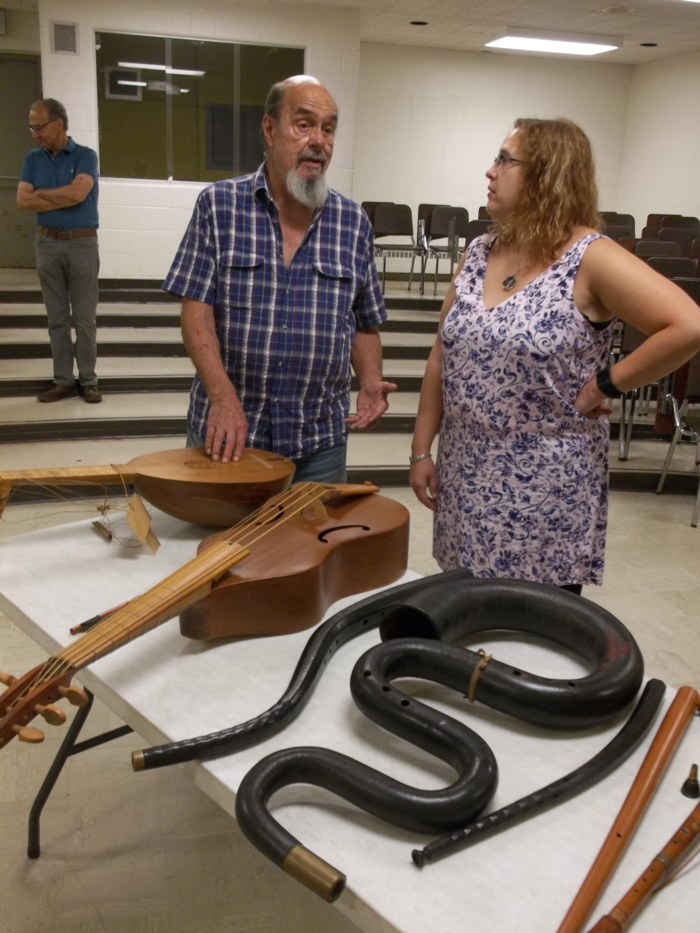 3. Gary is explaining to Professor Long that the bass zink is most often referred to as a: 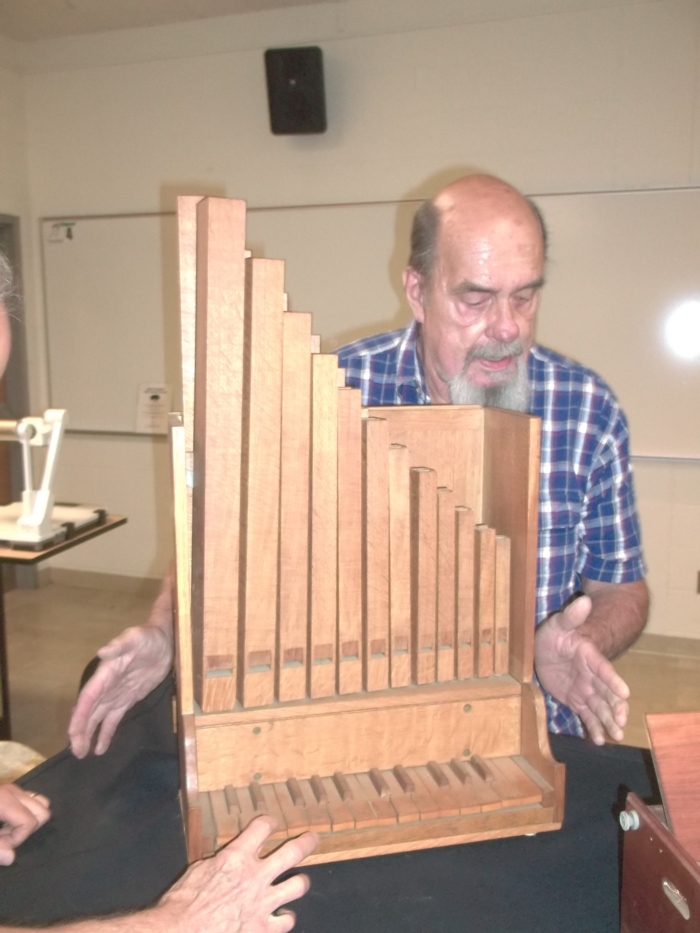 4. The portative organ was often worn strapped to the chest of the performer.  This allowed the performer to finger the keys with one hand while:

a. holding/playing a small kazoo with the other hand.

b. manipulating the bellows with the other hand.

c. conducting a Baroque ensemble with the other hand.

2. Crumhorn – a double reed instrument of limited range.  The reed is mounted inside a long windcap.  Blowing through a slit in the windcap produces the note.  The end of the crumhorn is traditionally curved upward resembling the letter “J”.  However, the curve is only decorative and does not influence the sound.

3. Bass Serpent – A wind instrument descended from the cornett.  It has a mouthpiece like that of a brass instrument but side holes like a woodwind.  The name is derived from its bent shape.  It is generally made from wood that has been covered with leather.

4. The portative (portable) organ has a single rank of flue pipes which, in this case, have been arranged in two rows.  By strapping the instrument to the performer it frees up one hand to work the bellows that produces its tone.

Is your name activated?

If you have not yet activated your name you can only see a few pages here on the website.  To activate your name (every Brother's name is already in the database) click on "Brother Profiles", find your name, click on it, and follow the instructions to update/activate your name.  It only takes a minute or two.