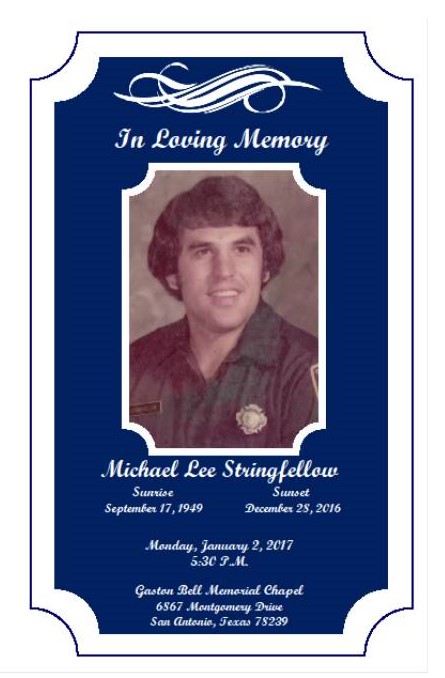 Michael Lee Stringfellow, passed away on December 28, 2016, with his family by his side in San Antonio, TX. He was born September 17, 1949, San Antonio, TX. He graduated from Highlands High School. His parents were Mitchell and Sally Stringfellow. Michael was in the fire department for over 30 years, his late father was in the fire department as a captain. His parents passed years ago which he truly loved and missed. Michael was first married to Cyndi Stringfellow and later married to Toni Stringfellow till her death less than two years ago. Michael's life was his kids and his career as a paramedic, which he helped and saved so many lives all throughout his living years. He was an avid hunter in his younger years, and was a jack of all trades. He could do and fix all things. He was preceded in death by his sons, Mitch, Michael, Joe-Michael, Tommy, and also by his late son Justin. His daughter Lina, His grandchildren Jordyn, Howard, Scarlett, Mason, Aubrey, Lucas, Jade, Kyndell, and Jake, His sisters Sandra and Linda. He leaves to cherish a lifetime of wonderful thoughts of memories of how he lived his life and what he did for everybody and helped people. He'll always remain in our hearts and thoughts for eternity.