Updates to Tunbosun Nuel's profile since your last visit are highlighted in yellow. 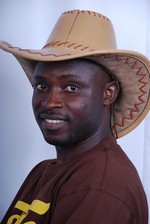 Below is an UNEDITED extract from my Autobiography

MY DAYS IN AQUINAS COLLEGE
As one of those they called "the Brights" at Ijapo Estate Primary School, my mind was set on going to one of the Federal Government Colleges in the country or one of the State Unity Secondary Schools. I was not called for an Interview into the Federal Government Colleges because my score was 497 and only those that scored above 500 were called for Interview. However, I attended an interview at St. John and Mary Unity Secondary, Owo and St. Thomas Aquinas College, Akure. I was admitted into Aquinas College in January 1991.
A School known for academic excellence, Aquinas College is a place where you have everything at your disposal. If you want to be a scholar, you can. If you desire to be a thug you can. If you choose the latter, the only problem you will have is that you will have to put your legs in the same trousers with our principal, Chief E.R.A Babalola whom we always called "Ologba" which literarily means the "Gardener" or rather, "the Owner of the Garden". Our Principal was believed to be the owner of the School. A man that will slap you and tellS you that he had the same feeling and pain you had from the slap by quoting Newton's third law of motion " Don't you know that action and reaction are equal and opposite?" the man would say. He was the Principal of the school since 1988 and was still the Principal when I left the School in 1996.
The colour of the school uniform was yellow shirt and Green Short or Trousers if you are in SS3 while the ceremonial dress was white long sleeve shirt and white trousers with green cap and a white tie with green strips but in 1991 when I was admitted into the school, Ologba changed the school Uniform to White Shirt and white Short while the ceremonial dress still remain as it was.
The JSS One and Two classes were on the same block. This is the block directly behind the kitchen with the Technical Workshop by its side and directly facing the school football pitch. The JSS One Classes were on the first floor while JSS two Classes and a small Staff room were on the ground floor.
Olakunle Obisesan was the Senior Prefect in 1991, we usually call him SP and his assistant, we called ASP. The SP and some prefects came to our block and distributed us into groups. Each group was made to be in a class pending the time our officially classified list would come out. I was one of the boys that were taken to JSS One-5. Most of my colleagues from Ijapo Estate Primary School were in JSS One-3, I missed them though but I needed to adjust to a new life so I decided to make new friends. I was made the leader of the class by the SP but I was not called Captain because it was not yet our permanent class. The SP instructed me to write the names of all the boys in my group. Every morning, he would come to take the attendance. After a week, the prefects started teaching us the school Anthem. I still remember the first two stanzas.

2. Achieve Integritas
To honour our Country
Our School, Our Family
Our Tradition respect.

They also taught us another song which was not part of the Anthem and that one goes thus;

The Prefects were giving us a kind of Orientation or rather an initiation into the culture of the school before the date of our-what they call "walking in ceremony". After they had done their part, they handed us over to the school Guidance Counselor, Mrs. Oloba who tried to inculcate some morals into us. She told us that in Aquinas College, People don't count on the statement; "I passed my exams" but on the question; "How many A's do I have?" She took us round the school and introduced us to different things in the school compound. She invited the Game mistress who took us to the football pitch, the Volleyball, the handball, basketball and the lawn tennis courts. The game mistress also showed us the Cricket field and told us it was the only cricket field in the whole Ondo State at that time. Mrs. Oloba also took us to the school Library where the Librarian put us through the procedures of using the library.
Aquinas College is a school of rituals and Traditions. Maybe because it is a Catholic school, I don't know but all the rituals and traditions are best known to any student who passed through the school.
When the day for our "walking in ceremony" arrived, we did not go to the assembly ground to join our seniors as usual in the morning, but we gathered at the front of the school Hall. We were guided by the Senior Prefect and His Assistant as we marched to the assembly. We proceeded from the School hall through the path between the Cricket field and the first Lawn Tennis court, crossed the major road from the School main gate and passed through the path between the geographical garden and the second lawn tennis court to the front of the school Library and climbed the stair case to the corridor floor of the SSS 2 classes. We marched down the corridor as we were singing "OH AQUINAS, OH AQUINAS, MY LOVE FOR YOU&&." We took a bend by the language Department and faced the direction going to the principal's Office but we did not reach the Principal's office before we came down the staircase that was directly facing the Assembly and lined up beside the JSS 2 Students as the Principal gave us his welcome Speech. This ceremony gave me an instinct that I was entering a new stage in my life.