Listed below are descriptions of some of our vacation trips.  If there is a link,  simply click on the link.  (You will need a .pdf viewer, such as Adobe to view the linked material)

2008 Christmas Cruise on the River Explorer.

December 19, 2008 through December 27, 2008.  This was the same trip that we had taken in 2007.  We visited Bay St. Louis, MS on the way down to New Orleans.  BSL is still pretty torn up and the streets are all torn up.  It is hard to get around for the detours and ripped up streets, undergoing repairs.  We boarded the RiverBarge, The River Explorer on Friday the 19th.  Our travel took us to Natchez, MS.  However, the river was rising so rapidly, we had to stop in St Francisville for two days and were bussed to Natchez.  Toured the Myrtles, a haunted B&B, and the old church in St Francisville.  Of course, Betsy went to the Button Museum (located in an old bank building).  Then on to Baton Rouge and finally up to the Grammercy Bridge for the Bonfires on the Levee on Christmas Eve.   The Bonfires  were spectacular.  Bonfires in both directions for as far as you could see.  We were told that there were over 100 of them.  The fireworks, including some professional ones, went on for over an hour.  In all, this is the best it can get.  Weather just a bit cool, but we were able to stay out and enjoy the fires.  Legend has it that the purpose of the bonfires is to guide Papa Noel to the levee and the homes of the children.  Then, back to New Orleans and our return trip home.  Betsy played the harmonica at the Christmas Memorial service, and for the Sunday Church.  We had a great time on the river.  We went over to the Ninth Ward to see the recovery.  It is still bleak, but some progress is being made.

The bad thing about this trip was that on Dec 23, the owner of the RiverBarge, Mr. Eddie Conrad, came aboard and announced to the crew and staff that this would be the last trip of the Riverbarge.  Apparently there are just not enough bookings for 2009 to continue.  This is the second boat that we were on when they announced they were stopping running  and the second that we were on the last cruise.  The first being the Delta Queen.  So, we closed down another boat. 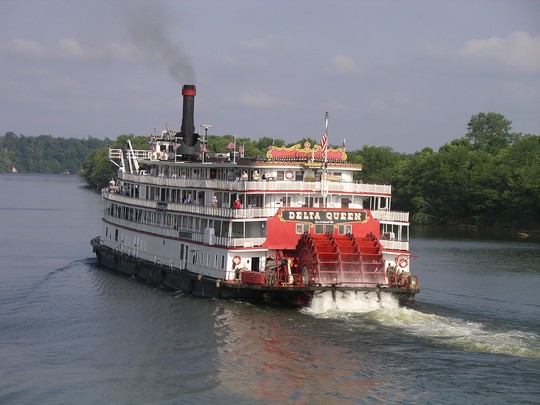 October 21, 2008 through October 31, 2008.  This was the last passenger voyage of the Legendary Delta Queen.  The trip was from Cincinnati to Memphis with stops in Maysville Ky, Madison IN, Louisville KY, Grandview IN, Henderson KY, Paduka KY, Cape Girardeau MO, New Madrid MO, and Memphis TN.  This was a very bittersweet trip.  On the one hand, any trip on the Delta Queen is special.  On the other hand, this was the last voyage for the Queen.  The Queen needs a Congressional Exemption to the SOLAS act to continue operating.  Unfortuantly, the head of the Transportaion Committee in congress is opposed to the exemption and will not let the bill come up for a vote.  It is pure politics.  The DQ is a safe boat.  She carried our wounded armed service personnel in WWII.  She hosted President Carter and his family in 1979.  She has never had a fire or major accident.  She has never failed a USCG inspection.  So, 150 crew members will lose their jobs, many of whom lost everything in Hurricane Katrina in 2005.  The DQ is not asking for a bailout or any money, just the exemption to continue operating.

2008 Cumberland and Tennesse Rivers on board the River Explorer.

July 14, 2008 thorugh July 26, 2008.  Very nice trip on the Cumberland and Tennesse Rivers.  Departed Nashville, TN with stops in Savannah Tn, Florence Tn, Guntersville, Clarksville Tn and return to Nashville.  Visitied Shiloh Battlefield, Ivy Green, the home of Helen Keller, The Country Music Hall of Fame.  Grand tour of Nashville.  This trip has some of the most beautiful scenery we have ever seen, including Alaska.

Toured Nashville and explored the Cumberland and Tennessee rivers. See Land Between the Lakes. From Savannah, Tenn., take a trip to Shiloh National Military Park. Visit Florence, Ala., Guntersville, Ala., and picturesque Clarksville, Tenn., home to the Customs House Museum and Cultural Center. Plus there's much more to see on these gorgeous rivers.