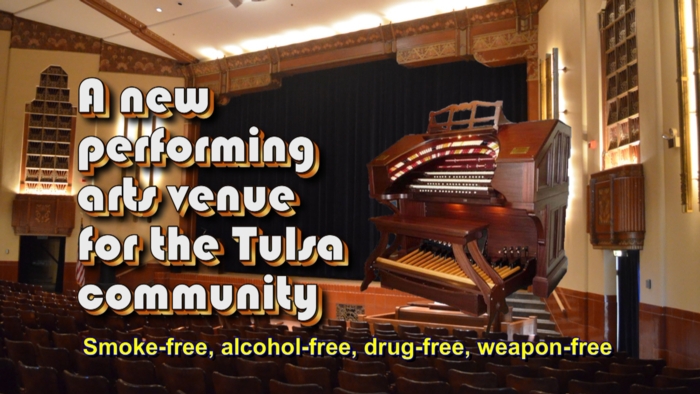 Many of you know that I am a volunteer on behalf of our alma mater, Will Rogers High School. In 2010, I formed the Will Rogers High School Community Foundation, a 501(c)(3) nonprofit entity that directly supports the school and its students primarily through scholarships and teacher-initiated projects. Several members of our class are actively engaged in the work of the foundation. To date (2021), the foundation has raised more than $1.5 million for those purposes. The foundation also serves as an occasional resource to the Tulsa Public Schools administration to raise private funding to augment tax-dollar appropriations and bond financing for capital improvements. I hope the idea of transforming the Art Deco auditorium at Will Rogers into a unique performing arts venue, which would allow the public to see this wonderful building, appeals to you.

The Will Rogers auditorium has never had a theatre pipe organ to grace its ornate chambers, as the school’s architects envisioned. The console of an electronic substitute sits silent in the organ pit and abandoned tubes and speakers occupy the chambers. Built during the Great Depression as a Public Works Administration project and opened for classes in the fall of 1939, Will Rogers High School was designed to have a theatre pipe organ, a common fixture in venues of that era, by including matching organ chambers along the facing proscenium walls extending at 45-degree angles from the stage. This is a perfect match-up of a museum quality pipe organ to a historical icon building. We are focusing on one of several Wurlitzers of the 1920s era that will fit our spaces. We are aware of several Wurlitzer theatre pipe organs built in the 1920s currently are available to us as a donation. Most were playable when they were put in storage, but some might require restoration before being placed in service at Will Rogers. The final cost would depend on the specific needs of the organ selected, which will not happen until funding is secured.

Our best estimate is $350,000 for restoration, transportation, installation, voicing and tuning, plus site preparation including the removal of the remnants of an electronic Allen organ installed in 1955 and declared unrepairable in 1985. You may remember that organ from our days as a student there. As owner of the facility, Tulsa Public Schools, would oversee the work of the contractors, which would be reimbursed by the Will Rogers High School Community Foundation.

The introduction of this historic Wurlitzer to Tulsa would offer a rare type of entertainment to this culturally rich city. It would also provide many opportunities for the public to experience the splendor of the publicly funded historic treasure where it would be housed. This instrument would be the crown jewel for historic Will Rogers High School, which offers an alcohol-free, smoke-free, drug-free and weapon-free environment. There is plenty of free parking. The addition of a theatre pipe organ, which is very different from a liturgical organ found in churches, would offer a space unmatched in Tulsa since the demise of the Majestic, Ritz, Orpheum and Rialto of similar size.

There are many performing arts stages in Tulsa, but none of comparable size would offer the inimitable sound of a theatre pipe organ. It would introduce a new dimension of entertainment not presently available in the greater Tulsa community. It can replicate the accompaniment of silent movies. The theatre organ—sometimes called a "unit orchestra"—was invented to replace an entire orchestra for this purpose. It can serve as the pit orchestra for live musical theatre productions. It is capable of producing all types of music, either as a solo instrument or with an ensemble, enhanced by a toy chest of tuned percussions and “bells and whistles.”

Even after moving away from Oklahoma’s winters in 2008 to a warmer climate, I still consider Tulsa as my home and have continued to stay engaged with my network of friends and the institutions I love, including Will Rogers High School.

I served twice as president of the Will Rogers High School Community Foundation, was a director, and currently serve as an advisor. With substantial assistance from the Will Rogers foundation, students and others, I produced three concerts, two of them recorded for television, and would volunteer to do more of them if we install a Wurlitzer theatre pipe organ as proposed. These events generate substantial income for the benefit of the school. While my wife and I have also donated money and gifts in kind to the Will Rogers foundation, we do not have the resources to fund the proposed Wurlitzer project alone. I am passionate to see this project to completion if I can secure funding. We need to raise about $350,000.

There is enough variety in the types of theatre organ concerts available to keep them interesting and attractive. Proceeds would be put in escrow to maintain the organ and promote events to share with the Tulsa community. Once the organ is up and running at Will Rogers, the cost of ongoing tuning and other maintenance would be self-sustaining. Some pipe organs that were rescued from their original venues, restored, and situated in public buildings, mostly school auditoriums, now sit idle because early enthusiasm soon wore off. That would not be the case here. If we are fortunate to acquire a museum quality instrument, it will be put to good use. With our experience of producing successful concerts of groups such as The Kingston Trio and a tribute band to the late Rock & Roll icon, our classmate Leon Russell, and hosting other sold-out events such as book tours by national authors that open the auditorium to the public, the Will Rogers High School Community Foundation is fully capable and ready to produce such events regularly for the greater Tulsa community.

The addition of a Wurlitzer theatre pipe organ to the Will Rogers auditorium, will allow us the flexibility to produce a variety of concerts on a regular basis, not only to pay for the continual upkeep and tuning of this instrument, but generate funds to support the primary goal of the foundation.

We recognize that funding for schools is in a critical state due to systemic causes. The Will Rogers High School Community Foundation has funded and continues to fund projects requested by the school to help fulfill its crucial needs that otherwise would not be realized. I am proud of that legacy. But the foundation cannot cure the causes and can do only so much. On the other hand, there are the philanthropists—individuals, trusts and foundations—whose interests are the preservation of Americana, the support of the performing arts, and/or the betterment of the community in general, who would not otherwise be donating toward school projects. We hope one of those will step forward to fund the installation of an enduring gift for the Tulsa community to enjoy. Funds earmarked for the organ project would not be comingled with the foundation’s general fund. This effort will not detract from the funding of other projects. The addition of a pipe organ to complete the architects’ plans for the school, which opened in 1939, has been endorsed by the immediate past and current superintendents of Tulsa Public Schools, Keith Ballard and Deborah Gist.

If you or someone you know might be a donor to this project, I would look forward to visiting with you about this opportunity to transform the auditorium of historic Will Rogers High School in to a unique performing arts venue for Tulsa.

Please view the short (8:40) video, “A new performing arts venue for the Tulsa community,” to highlight the purpose and concept of this proposal. It includes many of Tulsa’s cultural venues, proposing that the Will Rogers auditorium should be equipped to join them.

To share this page with a potential donor, copy this link and paste it in an email to that person: