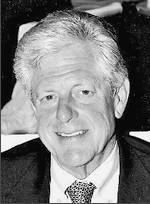 Robert Lyons Fraser, resident of Camano Island, WA died on April 12, 2011 at the age of 65 after suffering from a brain aneurysm.  He was born March 25, 1946 in Seattle to his late parents Robert and Eleanore Fraser of Marysville and Camano Island.

Robert graduated from Marysville Pilchuck High School and went on to serve in the United States Navy for two years. He retired from Edmonds Community College as Director of Maintenance following 32 years of service.

Robert enjoyed his retirement years fishing, hunting and boating. However, what brought him the most joy was traveling with his wife and friends and spending time with his family and three grandchildren. He is survived by his loving wife Peggy (Alsop); daughters Lisa Fraser and Jennifer Rex (husband Tracy); and his three grandchildren Austin (7), Emily (6), and Carson (2).