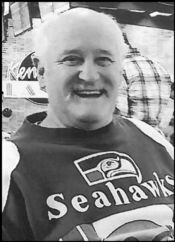 Lester Eugene "Les" Dahl, 70, of Shoreline, WA passed away in the early hours of July 31, 2017 in his sleep. He was born in Mount Vernon, WA on September 19, 1946. He grew up and lived in Snohomish County, WA graduating from Edmonds High School in 1964. Les joined the U.S. Navy after high school where he served during the Vietnam era. Upon returning home from the war, he settled down in Shoreline where he married Terri Loveland on August 14, 1976. He built his career in auto body and worked as a journeyman in body and fender -- none more meticulous and proud of their craft. He had a passion for sports and that showed when he became an umpire for local softball leagues, which he did for over 20 years. After retirement from auto body, he worked part-time as a greeter at Home Depot where we all lovingly joked that there was no job more fitting for him. He enjoyed life and was well-liked by everyone he came across. He loved being outdoors and when he wasn't umpiring, he was fishing, working out in his yard, or enjoying time with his grandkids. Les was preceded in death by his mother, Janesse; brother, Doug; sister, Diane; and daughter, Shannan. Les leaves behind his beloved wife, Terri; two children, Stephen (Shelly) Bumgarner and Julie (Derek) Garmon; and his father, Edwin Dahl; sister, Kathy; grandchildren, Courtney, Kristin, Max, Dylan, Tori, DJ, Amanda; great grandkids, Liam and Addison; and nieces, Crystal and Alysha. He will be greatly missed by all, to the moon, stars and back again.